How is the end sound of -ed pronounced in English?

In my years of teaching English to speakers of other languages, this has been a frequent pronunciation problem and that is understandable - 2 letters pronounced 3 ways and the past tense of most verbs in English are created with these 2 letters - ed. 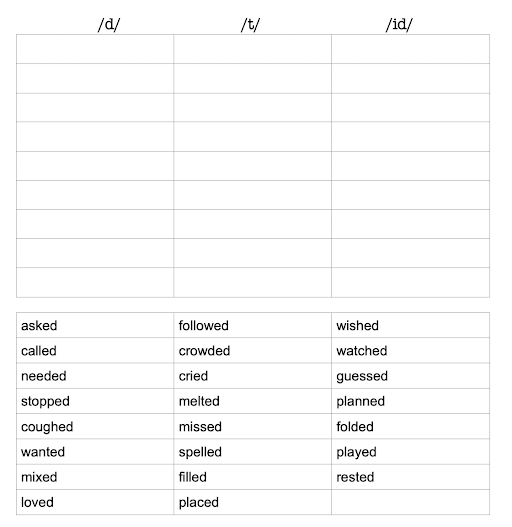 So how do you know which words say /d/ which say /t/ and which say /id/?  Can you place the words above in the correct column for end sound?

The reality is that most native speakers cannot tell you any rule.  They grew up saying the words correctly because they "absorbed" the language rather than studying and learning it.  So how do you know?

The simple way is to remember ONLY words that already contain d or t before -ed say /id/.    So if the word ends in -ded or -ted then and only then does it say /id/.  The other words ending in -ed will say /d/ or /t/.

It will be very difficult for you to say a word that should be said with a /d/ end sound with a /t/ end sound so this one rule should help you.  Try saying called with a /t/ sound insteand of the /d/ as it is properly said.  It is next to impossible.  you could say call /id/ but that we know is wrong but saying call/t/?  I can't.

I hope that helps.

Welcome to a New World of ESL

In English certain letters represent Consonant sounds and others represent Vowel Sounds.   The vowels are fewer but more complicated. 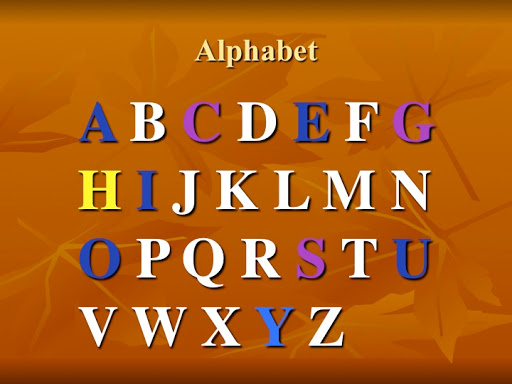 In the chart above, the dark Blue letters are always Vowels while Y shown in light blue is sometimes a vowel and sometimes a consonant. 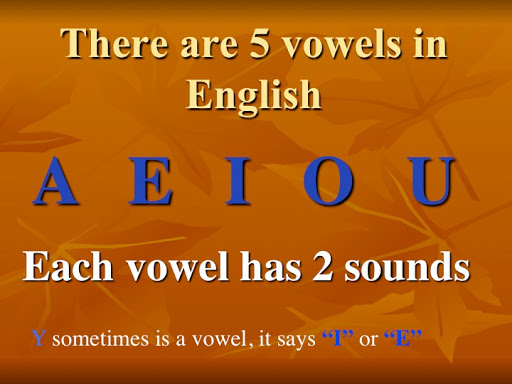 Each Vowel is said to have two sounds - Long and Short.

The Long Vowel says the name of the Vowel such as A in Cake; E in Key; I in Ice; O in Oh; and U in which is how You sounds. (you can hear that U actually starts with a Y sound which is why You and the Long U sound alike; that’s important later for using articles a or an)

However there is one more sound each vowel can make.  That sound is called Schwa.  The schwa sound is the sound you hear when you say China.  That last sound - uh is the schwa.

the short U and the Schwa have almost the same sound and in American English you may not be able to hear any difference - I usually can’t.  So cut - is that short u or schwa?  Don’t worry about it.  You will be understood since the difference is only the length of the sound.

Look back at my first blog - 44 Sounds of English to see the American Phonic System and the IPA showing these sounds also. 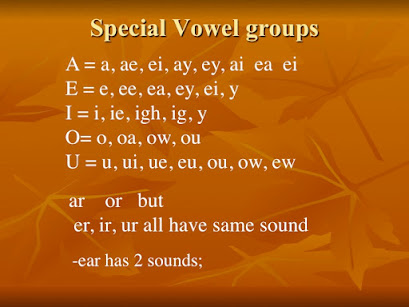 -ear as shown in my chart has 2 different sounds possible.  It can say ear or air so bear says bair not beer (ear).  Tear (ear) is different from  Tear (Tair) - both words are spelled the same but pronounced differently.

This blog is designed to introduce you to English Phonics but hearing it better than reading it here so I recommend that if you want to improve your sounds, visit Keenyn Rhodes at  https://www.clearenglishcorner.com/.  She is very good at illustrating how to say the sounds of English.  She has some YouTube Videos also.  And if you are wondering, there is no connection between us - I don’t make any money referring you to her site.  She is simply much better than I am at teaching phonics especially online.

The 44 Sounds of American English

Welcome to a New World - ESL

I am going to start with phonics although English is not a true phonetic language.  But to learn to speak any langauge, you need to master the sounds of that language.  So the first few blog posts will be about the Sounds of English.  I will focus on American English.

In American English there are about 44 sounds formed from the 26 letters in the English Alphabet.  I say about because some dialects (regional variances) may have more or less.

In the United States, people tend to use the American Phonetic system shown in this photo from Scholastic book  Phonics from A to Z (2nd Edition) by Wiley Blevins (I see there is now a 3rd edition).  We talk about long and short vowels - I’ll discuss vowels in the next blog post. 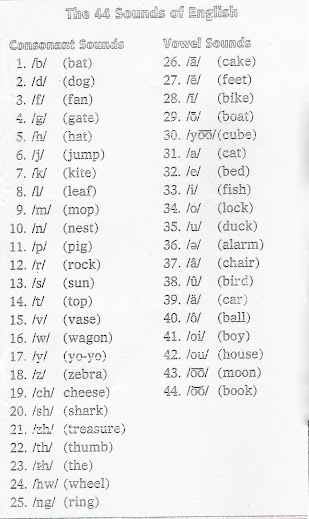 In China where I taught for 7 years, they use the International Phonetic Alphabet or IPA.  I have edited an American English IPA chart to add sample words. 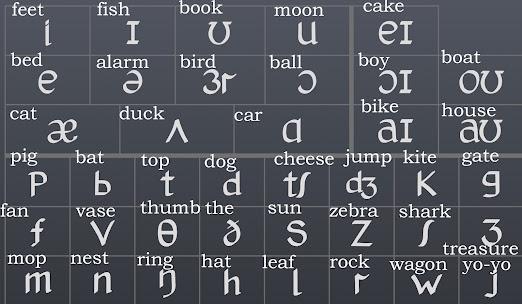 There is an app available for Apple phones and iPads (free or paid; I use the free version) and I think it is from Macmillan publishing.  See images below. 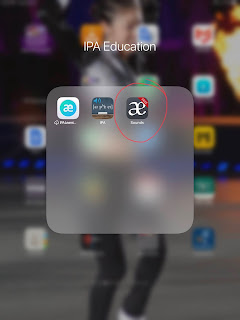 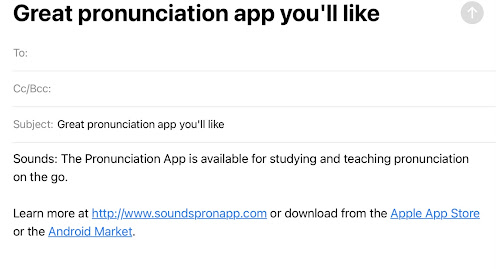 It may be available for Android devices also.  I have always used it on my iPad.  You can choose American or British Charts from the app settings and switch as you need.  It allows you to hear the sound in isolation.

Welcome to a New World of English

My name is Tim New thus the “pun" in the title of my sites - a New World.  I had a background in Science (a BA in Chemistry), and Law - a JD degree and 13 years working as a corporate attorney -  before I ever taught English.

When I first taught English, I winged it.  I taught based on what I was thought was good.  I started teaching at a private bilingual school in Mexico just across the border from Texas.  Students took classes in their native Spanish language but also took classes in English.

The difficulty arose from the placement of students in English.  They were assigned English language classes based on their Spanish level - if they were year 3 in Spanish they were placed in Year 3 English Language classes.  Needless to say, that wasn’t ideal.  The actual level of English ability varied greatly.  I more or less threw away the Abeka textbooks and made my own lessons.

After leaving the school, I took a 40 hour course in TESOL - Teaching English to Speakers of other Languages.  That course more or less confirmed what I had been doing in my classroom.  That was in the summer of 2009.  In August of 2009, I flew to South Korea and began teaching as a certified English Instructor.

One thing I quickly learned.  Being a NATIVE English speaker does not qualify one to be a teacher of English.  My education prior to teaching English resulted in me knowing the correct English even if I did not always know why.  But I had experiences of others teaching English (or attempting to teach English) who, to state it simply, had no idea of what was correct or incorrect.  They were teaching learners completely “bad" English.  So don’t assume a person who is a native speaker actually speaks or writes their native language correctly.

After South Korea I went to Hong Kong and after about a year and a half return to the USA for 1 year before going to Shenzhen, Guangdong, China for 7 years.  I returned to the US from Shenzhen at the end of October, 2020.

In my 10 plus years of teaching abroad, I have learned the “whys" that I did not know when I started.  I also learned a lot about the differences between American English and British English (but not all) and I learned even textbooks can be wrong (or should I say inaccurate) as they teach rules when at times rules simply don’t apply as absolutes.

I now have my CertTesol from Trinity College in London in addition to my own "on the job” learning.  To be honest, I learned more “Rules” of English by answering questions from students than I have from any class.  Students have asked many questions over the years.  In the event did not know the answer (the reason why) then I would research it and find the answer.  I continue to do that today.  I have accumulated many resources to help me help them and you.  I still consider “The Oxford Guide to English Grammar” as the Bible for English grammar.  John Eastwood did an excellent job putting it together.  But I also use a variety of other sources when I find a need to explain some concept of English grammar.

This blog will be an effort on my part to help address English learning.  I will have a bias towards American English since I am American.  However I will point out differences from time to time in usage between American and British English.

How is the end sound of -ed pronounced in English?  The suffix -ed has three different pronunciations in English /d/  /t/ and /id/ In my yea...

Tim New
I'm a diverse individual with a diverse background educationally as well as life experience. I have lived in Mexico, South Korea, Hong Kong and mainland China in addition to my native USA.